I have just spent two of the most glorious mornings on Otmoor. After the torrential rain from earlier in the week. I first ventured down to the moor on Thursday. It was a beautiful start to the day. Crisp and cold with patches of frost. But the sun was shining, which more than made up for the cold. From Otmoor lane, looking down on the moor, it looked absolutely fantastic. From my vantage point i could clearly see the extent of the floods.

﻿
﻿
These characters were standing in the field behind me as i stood admiring the view. In the biting cold i must say i was jealous of their warm coats.

In the hedgerows nearby were these bright red berries. Not 100% sure but i think they are Black Bryony berries. (Poisonous) 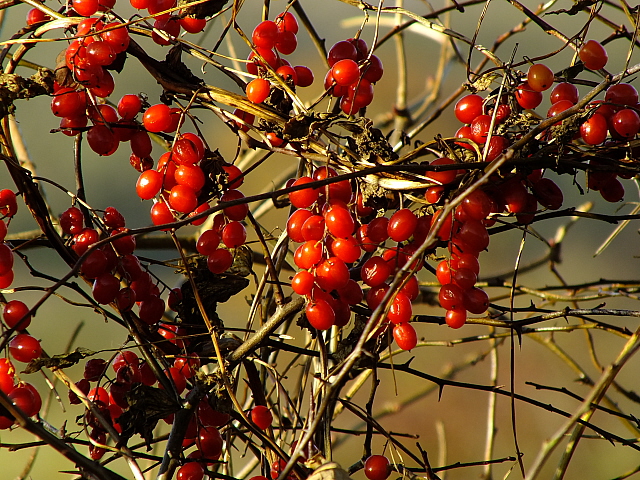 Once on the moor I was greeted by a lovely Red Kite floating over the car park. 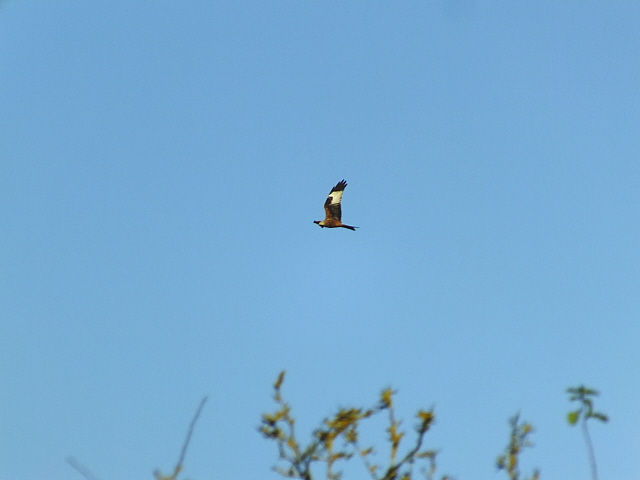 The first of many birds of prey to be seen over the next two days. Hen Harrier, Buzzard, Peregrine, Sparrowhawks and Kestrels seen on both days. 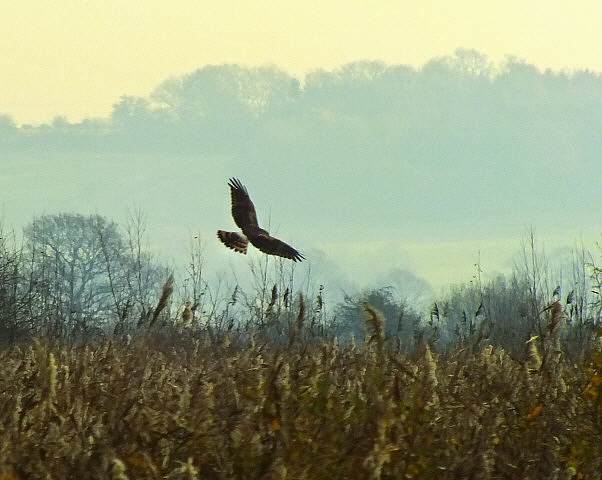 Both days saw a flock of twenty or so chaffinches feeding near the Cattle pens and feeders. Along with Meadow Pipits, Dunnocks, Great tits, Blue Tits and Goldfinches. A Song thrush was also there on Friday. On Thursday two Redpolls were in a bush near the path opposite the feeders. 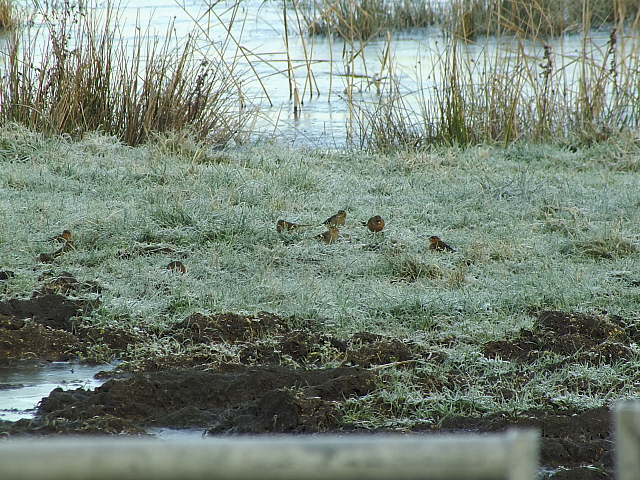 ﻿﻿
Extensive flooding over much of the reserve, made for some spectacular sights. Warbler alley and adjoining field were badly affected. 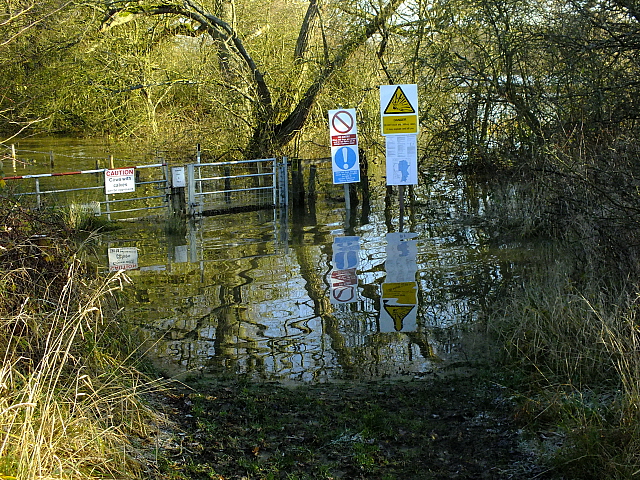 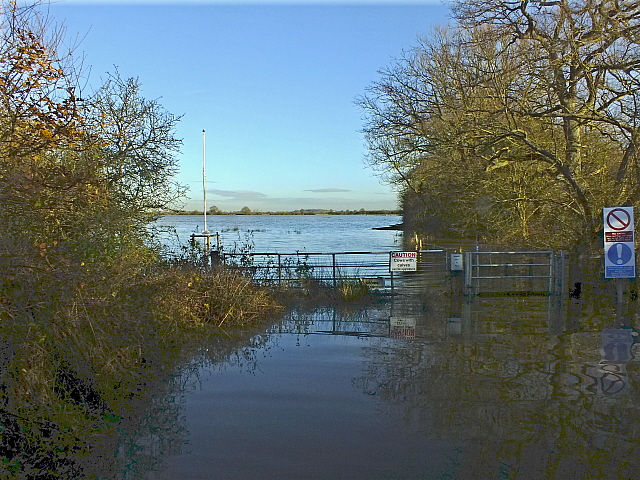 Three Snipe were on one of the scrapes on Greenaways on Thursday. Walking along the bridleway. Fieldfares and Redwings were much in evidence on both days. Especially Fieldfares which were numerous everywhere on the reserve.

Small flocks of Meadow Pipits were seen on both days.


﻿
﻿ Thursday.. A Siskin was calling from the first Oak tree along the bridleway. Try as i might, i couldn't see it, until it flew. Heading back towards and over the car park field. A Bittern was also seen on Thursday, from the first screen. Flying across the right hand channel. (per Jack)
Mixed Tit flocks and Goldcrests were again seen on both days as were Bullfinches and Reed Buntings.

﻿﻿ It's great to see so much water in the lagoons in front of the hide. Compared to the Summer and early Autumn. Lots of wildfowl are now present. Predominantly Wigeon, Mallard and Teal. Several Little Egrets are regular visitors to the area. Large flocks of Greylag and Canadas are still present on Ashgrave with smaller numbers on Big Otmoor.
﻿
﻿ ﻿﻿ 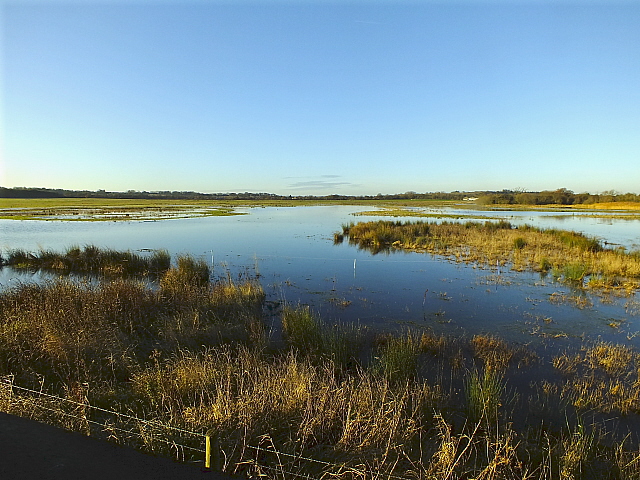 If Thusday was picturesque. Friday was even more beautiful. A sharp overnight frost, gave way to a bright crisp, misty morning. Draped in the most glorious golden sunrise. Natures own pallette. It was an artists dream, the colours were just fantastic. Most of the water had turned to ice. Most noticable on the path between the screens. Both fields beside the track were completely flooded and turned to ice. Like giant skating rinks. 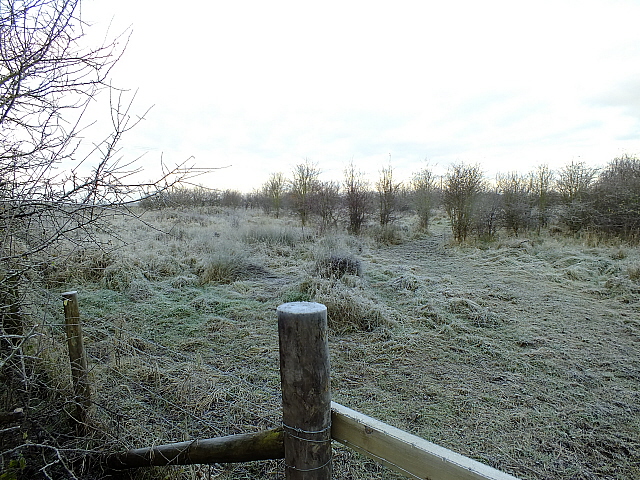 Heading along the bridleway i was just admiring my first perched Fieldfare and Redwing feeding in the bushes and a snipe called overhead and jinked its way in its characteristic slightly chaotic flight over to closes. I noticed something in the distance along the track, running towards me. Raising my binoculars i was pleased to see a Hare bobbing along. Unhurried it jogged along stopping every now and then for a quick wash. It bounded right up to within ten feet of me. Completely unperturbed by my presence. It posed for a couple of photos then bounded back from whence it came.

Later, on my way back. I found twenty five golden Plover over the far side of Greenaways. Mixed in with several Lapwings, Fieldfares and Starlings. A further thirty five plus Plovers flew along the tree line from the Pill area and landed in the flood field beyond Greenaways.
By this time the sun had risen over the horizon. Turning everything into a beautiful golden yellowy orange. 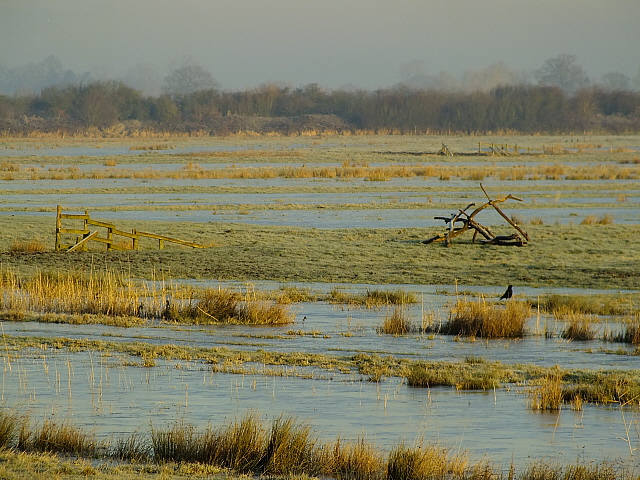 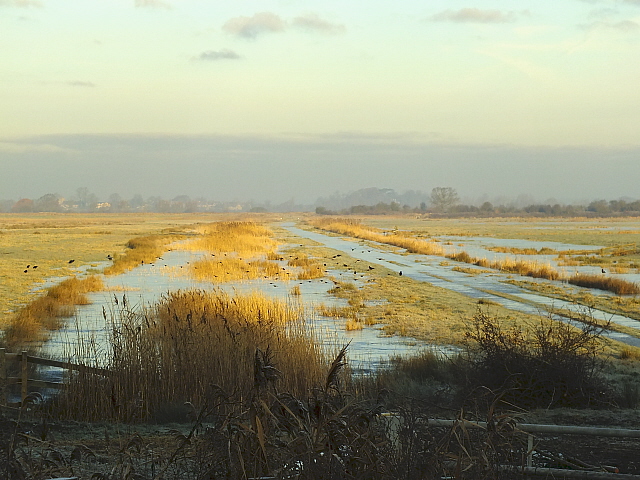 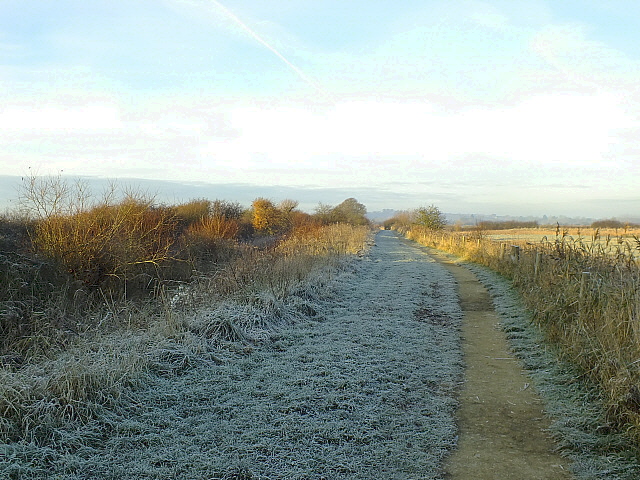 It was just one of those mornings where it was an absolute privilege to witness.
Two Stonechats were present on fence posts close to the gate that leads to the screens. A Water Rail squealed from the ditch near the bridge to the hide. A Sparrowhawk  was hunting in front of the hide. Parties of Wigeon and Teal dabbled and grazed around the edges of the water. Three Little Egrets also there.
The 1st screen that had produced a sighting of a Bittern yesterday was again very quiet. One Wigeon, two Teal, two mallard and a coot. The only birds on the water. Several wisps of Snipe were flying around the reed beds. The largest contained eighteen birds. Forty six Snipe seen in total. The light here was sensational. turning the reed bed into a fiery golden colour. The water being half iced over a contrast from the previous day.

Four Goldcrests were flying back and forth among the Oak trees past the 1st screen.
A lovely peaceful walk down to the 2nd screen Produced the usual Fieldfare, Redwing Robins and Dunnock. The picturesque views of the flooded field was spectacular. With the two big Oaks appearing to be  marooned in the ice. 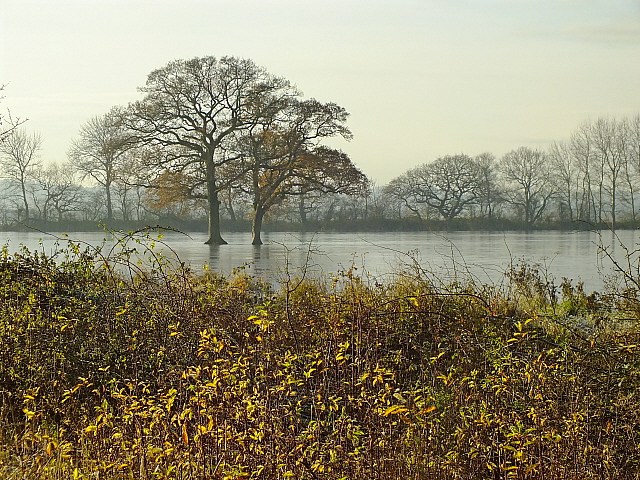 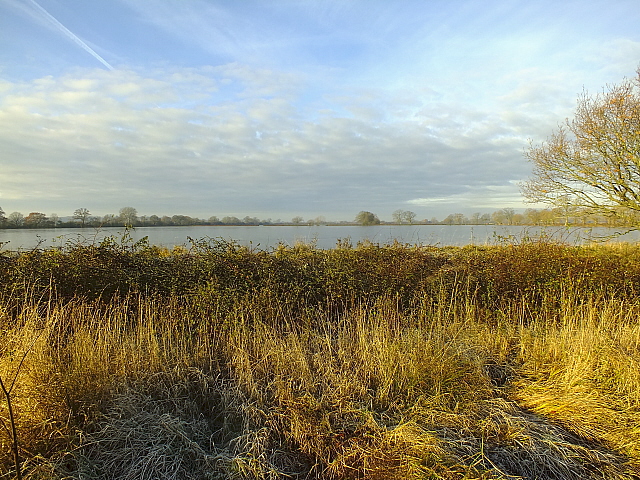 In the adjacent field which was also flooded. Lapwing, Fieldfare and Starlings were feeding on the ice and around the remaining grassy areas.

The 2nd screen produced the Ringtail Hen Harrier. A Kingfisher added a splash of electric blue as it wizzed across the water in front of the screen. A pochard was on the water along with Gadwall, Shoveler, Mallard, Teal , Wigeon and Coots. Two Bullfinches also there.
On the walk back a Peregrine was circling over Big Otmoor. Lapwing were resting on the island in the scrape. (Greenaways) 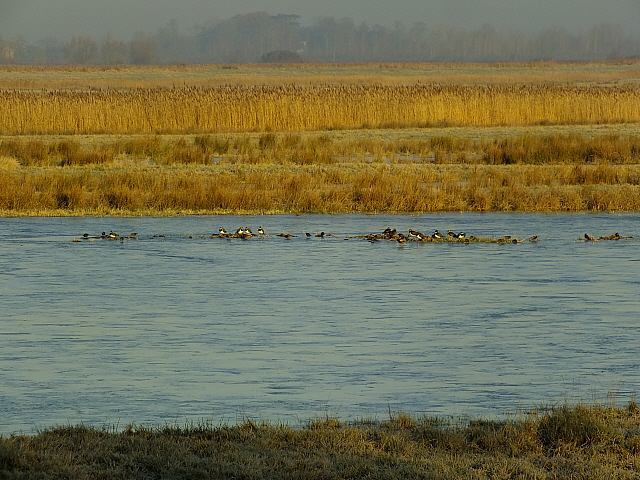 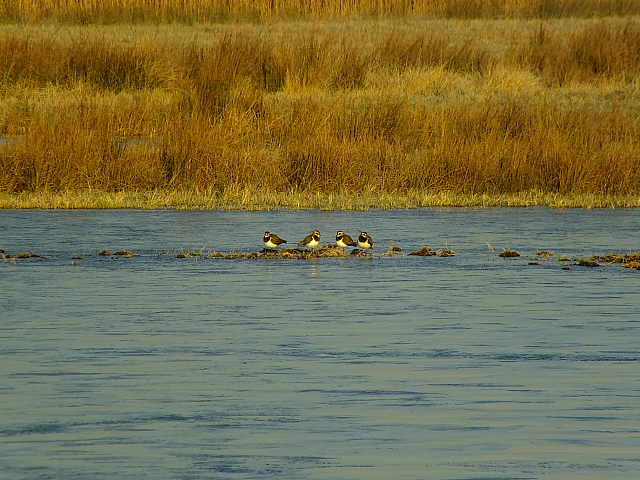 What a truly brilliant couple of days birding. As i said before a real privilege to be on the moor in such spectacular circumstances. And rounded of nicely on arriving home, with a hot mug of tea and a toasted bacon and mushroom sandwich.
I would just like to finish by thanking personally, all of the volunteers and staff who run the reserve. For their dedication and very hard work, that makes it such a fantastic place and makes it all possible.
Cheers
Posted by Unknown at 16:34 2 comments: