Otmoor sightings for the 25th and 26th march

I am not saying it's cold on Otmoor at the moment. But apparently Ranulph Fiennes is planning for an expedition there.
Exactly one year ago today, I was walking around Otmoor in a t shirt, in bright sunshine and clear blue skies, watching fourteen Buzzards circling together on a thermal. There were plenty of thermals at Otmoor today but only the clothing variety.
Arriving in the carpark on Monday the 25th. i was not at all surprised to find it completely empty. i began to question my sanity as i walked up the track and the bitter wind howled around my ears. A Kestrel, whose feathers were being buffeted by the strong easterly wind. Looked down on me quizzically from the wires. As if to say. "What the hell are you doing ? Are you mad ? " 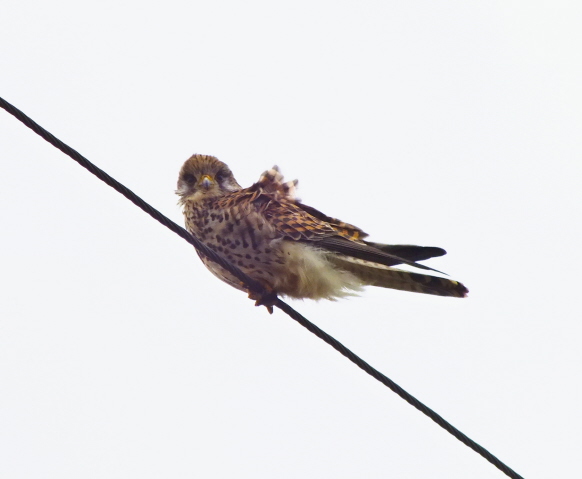 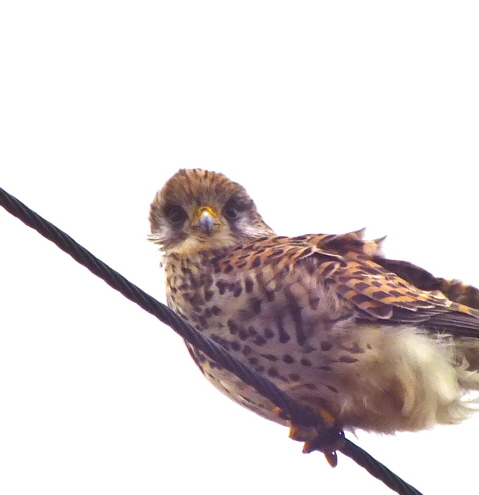 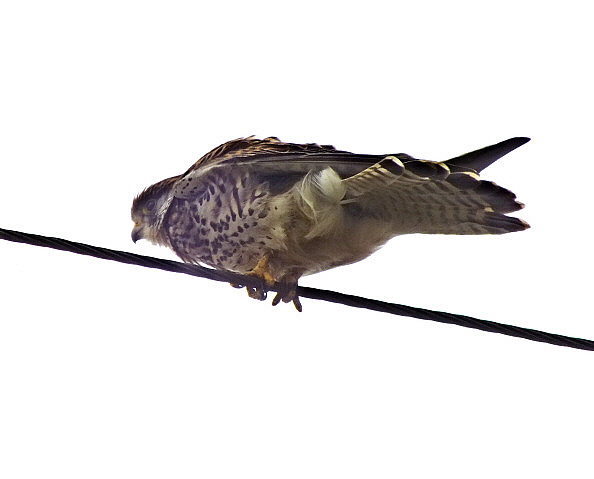 As i stood admiring a Barn Owl hunting over the Carpark field. Joe, one of the Wardens drove past me with a cheery wave from his heated vehicle cab. It was Joe, who would later that morning, find and identify the Ferruginous duck. The Barn owl was still hunting when i returned some six hours later. It was still there the following day both on the journey out and back again. The poor thing must be starving. To be hunting continuously as it is. 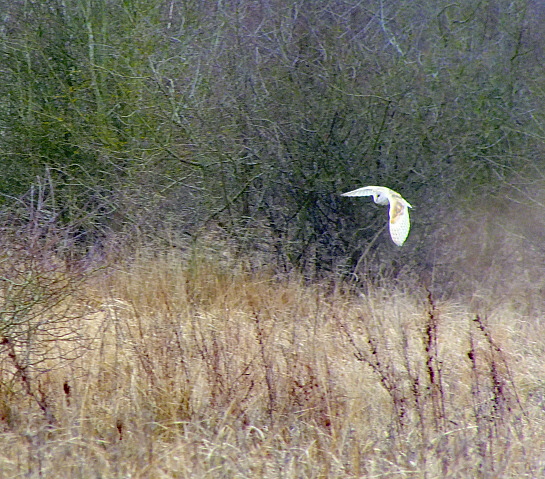 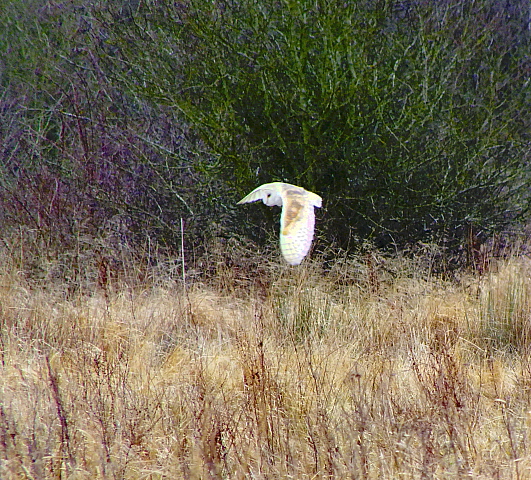 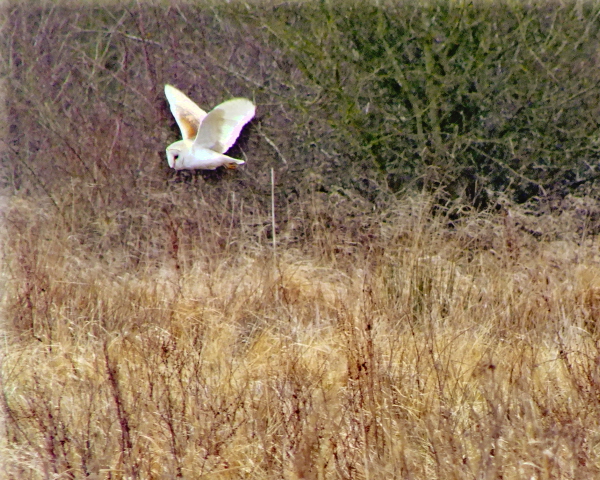 The hide provided welcome shelter from the wind. The seven Whitefronted Geese were still feeding over the far side of Ashgave. (Both days) Small parties of very smart looking Wigeon, graced the pools in front of the hide. Three Little Egrets and two Grey Herons also there. Thirty plus fieldfare fed among an equal number of Starlings close to the pools. The Egrets were later seen flying over big Otmoor.

﻿ ﻿﻿ ﻿ Big Otmoor provided the spectacle of the day, with a flock of five hundred Golden Plover (est) wheeling around the field. Several Redshank and Curlews were present in various locations with the best being a flock of ten Curlews flying together on the 26th.


﻿ ﻿
﻿ ﻿
The 1st screen was fairly lively with parties of Shoveller, Teal, Wigeon and Mallard interspersed with the odd Gadwall, Pochard and Tufted Duck regularly taking to the wing.

﻿ ﻿ The 2nd screen was so bitterly cold. The wind seemed to gain in strength as it channelled through the viewing slits. A very welcome female Hen Harrier, twisted and turned as it flew against the wind, across the field beyond the screen. Thirty or so Fieldfare squabbled in the bushes nearby. Gazing into the wind with watering eyes. Just a few Pochard, Tufted and Coot were sheltering against the reeds. After no more than five minutes i decided enough was enough. The thought of a hot mug of tea and a better late than never cooked breakfast, was beckoning me from home.
Approaching the 1st screen on my way back. I observed five Eskimos vacating said screen.
"Hello Peter" said a familiar voice.
I looked up to see Peter Barker, Badger, Terry Sherlock Andy Last and another chap who i didn't know
"Have you found the Duck"? He asked.
A Gargany had been reported the day before. As if these five brave souls would be taking time of work etc. To come out in these awful conditions. Just to see a Gargany.
"Do you mean the Gargany?" I stupidly replied.
I was informed that the warden had found a Ferruginous Duck.
Jason informed me he had texted me. But again rather stupidly i had forgotten to switch my phone on.
I walked back towards the 2nd screen with them.
The bird had been sighted by the warden, in a channel half way between the screens. We were joined by Paul and another birder. Some of the gathering had brief views in the channel. We commuted back and forth several times to the 2nd screen and the channel. I was one of the few who hadn't seen it yet. Badger was down at the 2nd screen on his own. the rest of us was staking out the channel, from several angles. When the text came through. It was showing well at the 2nd screen. We trudged en masse back towards the screen. The cry went up.
"That's it flying".
All i saw was, a very brief sighting, as the bird dived back into the reedbed channel, from where we had just come from. No further sightings for me that day. Although Badger got some fantastic photos and a video (See Oxon bird log).
A Peregrine cruised overhead and dropped into the field beyond the reedbed.
A Marsh Harrier was also reported there later.
The following day i arrived and headed straight for the 2nd screen. Stopping only briefly to chat with Terry who was on his way back. He informed me that the bird was showing well at the 2nd screen. A flock of ten Curlews flew over the 1st screen and landed on Greenaways. Arriving at the 2nd screen i quickly found the bird. It was accompanying a couple of Pochard. Although it was disappearing frequently into the reeds it would soon emerge again and give good clear views.
(See picture at top of page)


﻿ ﻿ As this Kestrel swooped down on the grass in front of me it appeared to tussle with something before swallowing it.

﻿ ﻿ I couldn't see what it was that the Kestrel had caught but it certainly put up a fight.

Just a quick mention about the feeders in the Carpark field. After a long walk it's good to sit a while and give the legs a rest, out of the wind and watch the frantic comings and goings of the birds. It was reported to me that Marsh Tit and Redpoll were sighted here on monday. 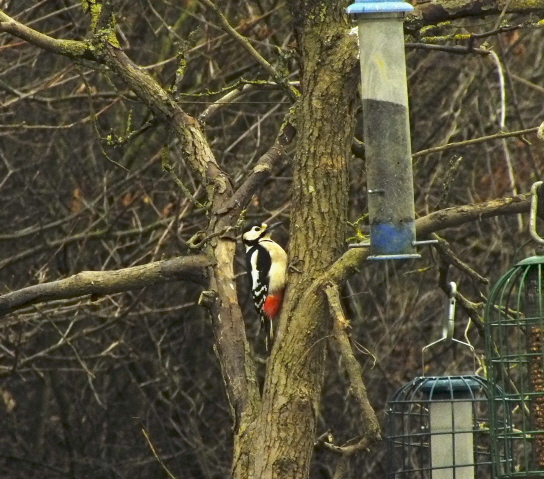 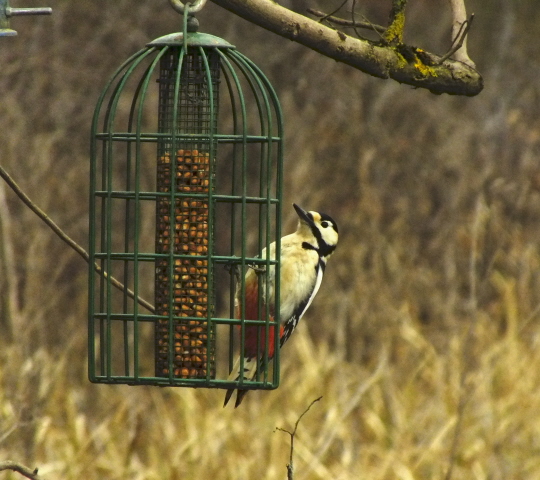 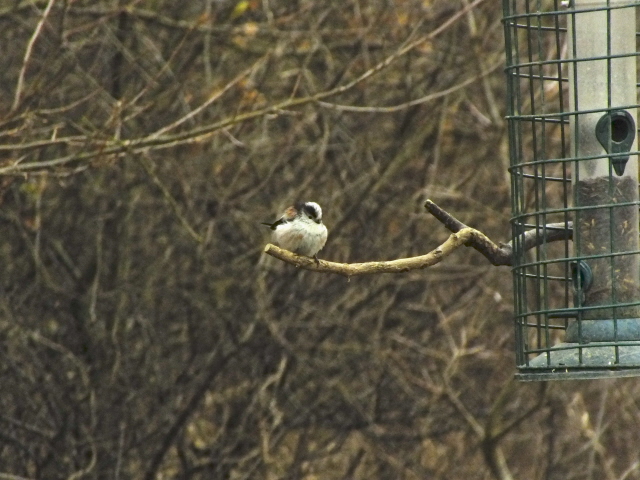 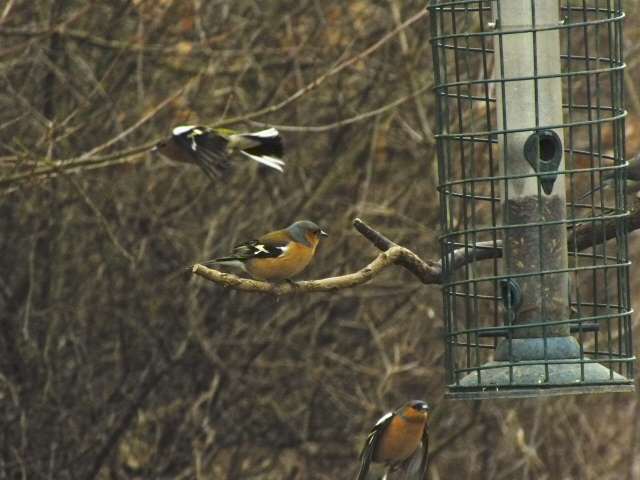 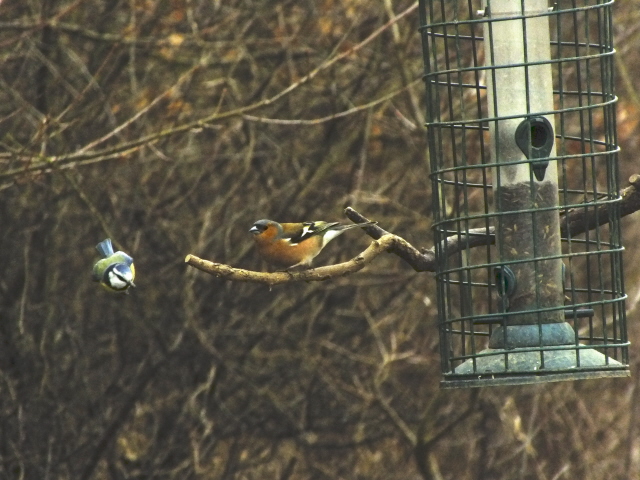 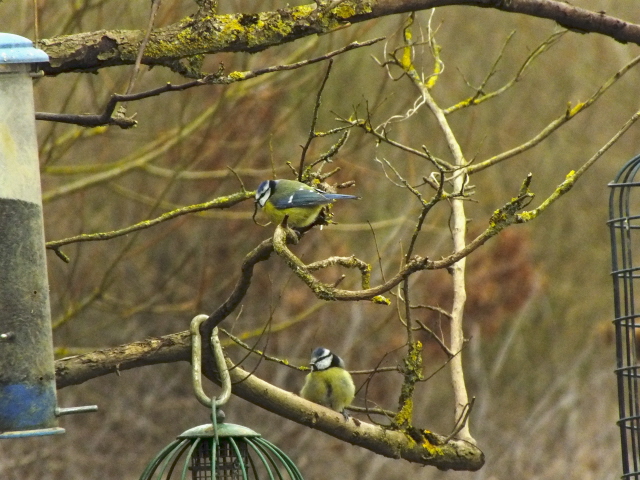 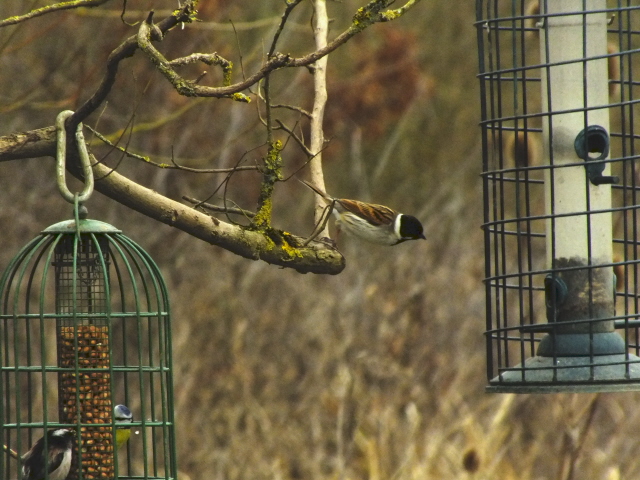 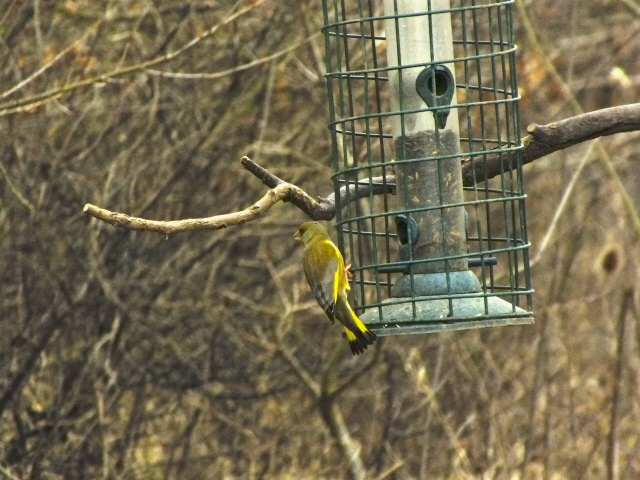 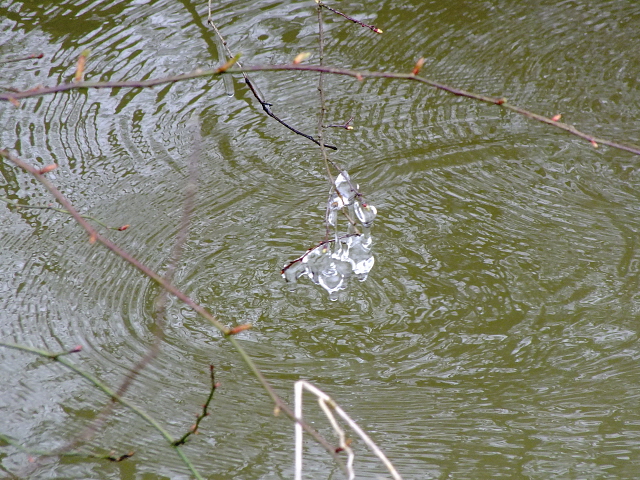 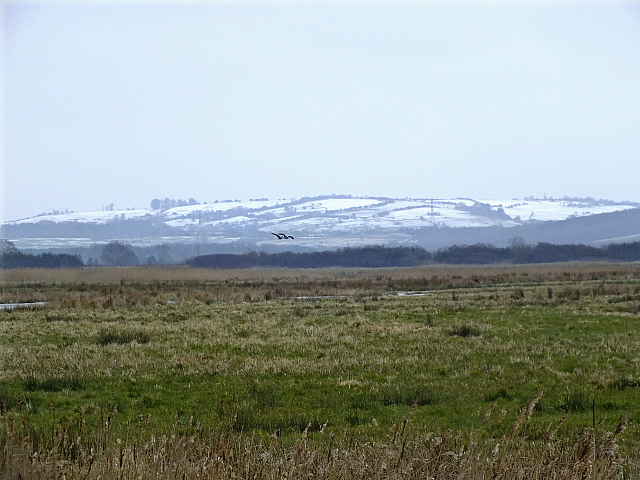 The snow capped mountains of Brill. 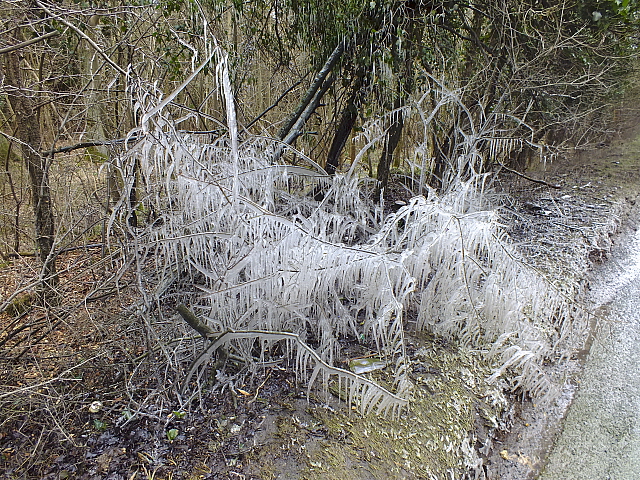 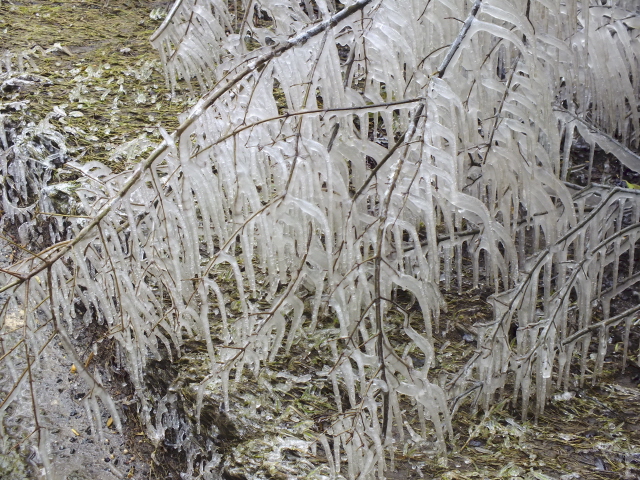 And lastly.. Another beast of Otmoor reported. Bigfoot or the Yeti as it is sometimes known. Is supposed to inhabit the cold reaches of North America and Nepal. Evidence has emerged that it is so cold at Otmoor at the moment that Bigfoot has put in an appearance. You can even make out the icy imprints of three of its toes at the far end. Note normal size footprints beside it. 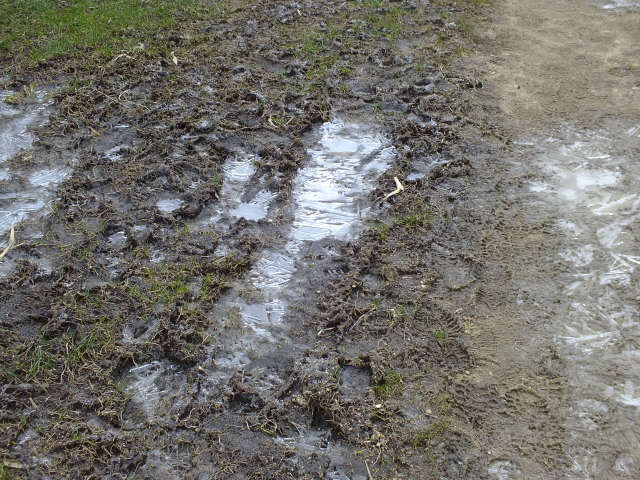 Driving along the road, that had been closed all last week, from Horton Cum Studley.  I was surprised to see, that only half of the hill has been resurfaced. The remaining half has so much water torrenting down it. I half expected to see a Kingfisher perched above it. A further surprise was the amount of snow at Beckley village and on Otmoor itself. Driving carefully down an icy frozen Otmoor lane. A pair of Pheasants were standing on the bank by the side of the track. As i approached. One of them decided, at the last second, to do a Kamikaze run across the road in front of the car. Instinct took over and i jabbed the brake. It's a funny feeling going down the road sideways. Fortunately i was only doing about five miles an hour. Otherwise i could have had a closer look at the Otmoor hedges than i normally do.
Arriving in the carpark, it looked fantastic. A sharp frost overnight had covered every branch, twig and blade of grass in a film of sparkling white ice chrystals. it was more like December than March. To add to the Christmassy feel a Robin was perched among the frosted branches singing its melancholy song. 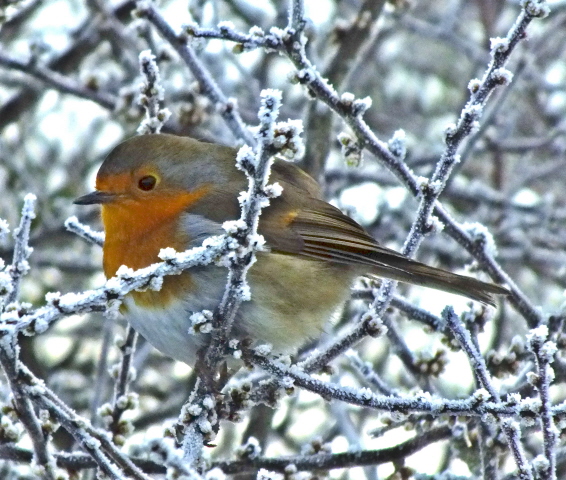 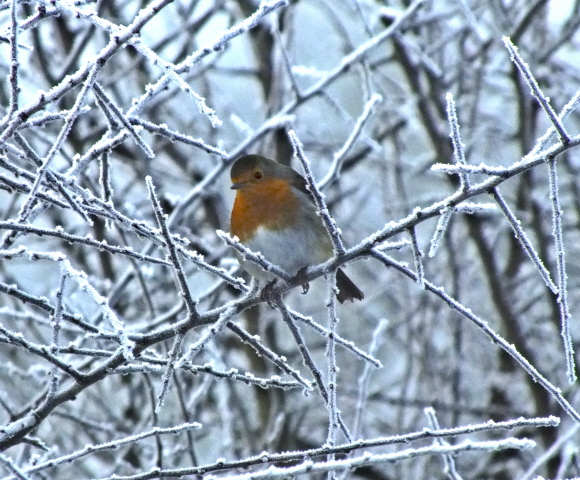 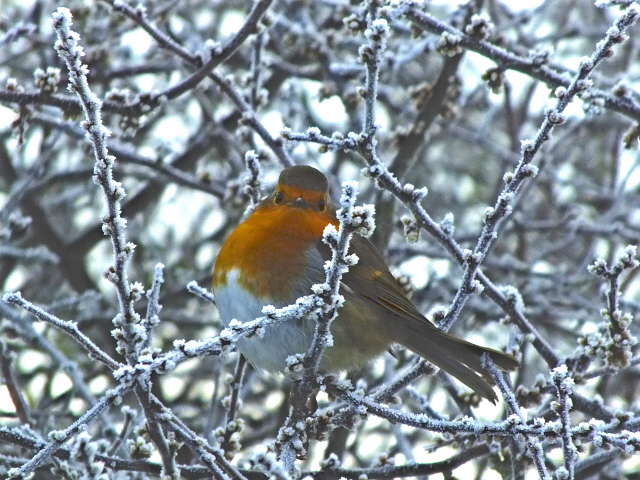 Lots of birds, unsurprisingly given the weather conditions around the feeders and cattle pens. I counted twenty six chaffinches and ten Reed Buntings feeding on the ground by the pens. Along with several dunnocks and a Songthrush. The feeders were dominated by Great and Blue Tits. A flock of Forty or so Snipe, Five Curlew and thirty plus Golden Plover were milling around with one hundred plus Lapwing, on Greenaways. Four Ruff were seen at the same location later on. Staying on the wader front. One Redshank was flying over Big Otmoor. One hundred Golden Plover (Ashgrave) and Twenty two more on Big Otmoor. A total of eight Curlew Today. Five Little Egrets and two grey Herons (Ashgrave). 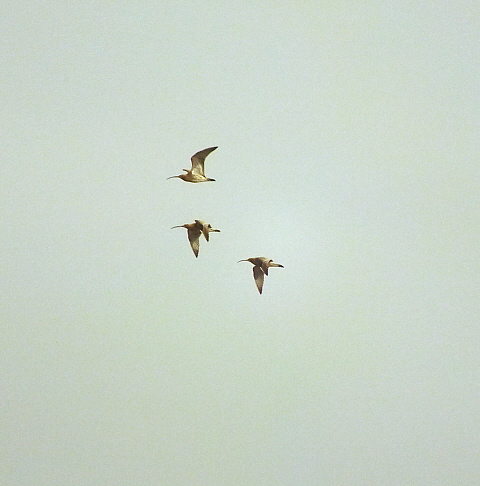 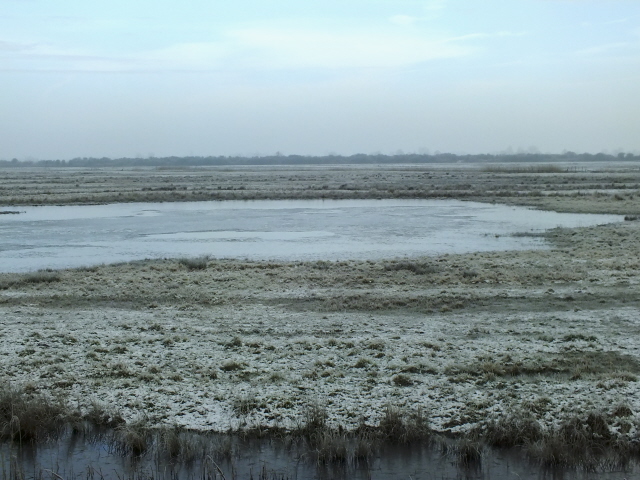 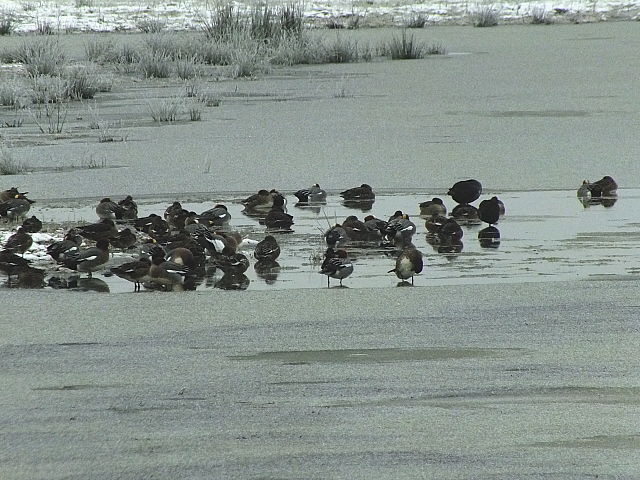 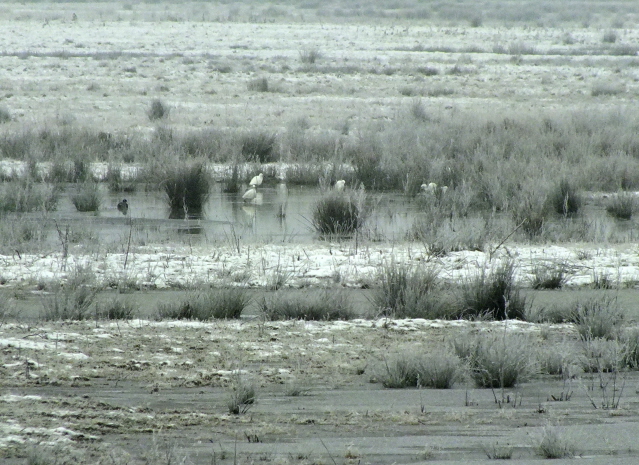 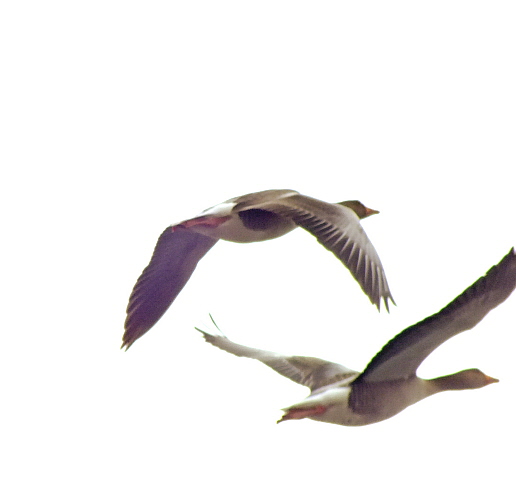 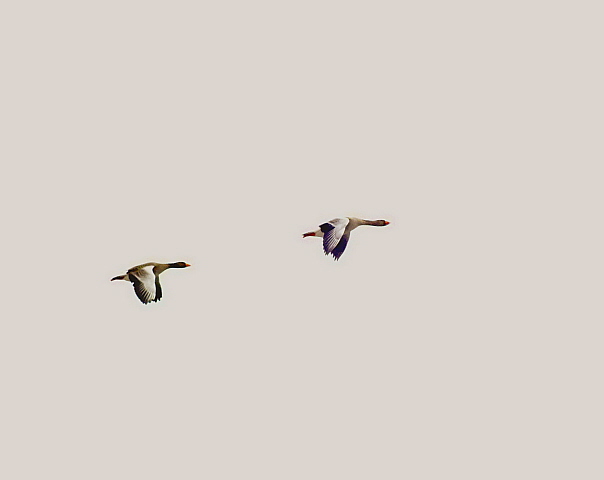 It was a good day for Talon't spotting. Birds of prey that is. Just past the hide. A fantastic male Merlin flew along the bridleway in front of me. A menacing Peregrine was hunting over Big Otmoor. A Ringtail Hen Harrier floated over the reedbeds. Red Kite, Buzzard, Sparrowhawk and Kestrel made up the impressive Otmoor's got Talons list.
A lone Chiffchaff was keeping company with two Goldcrests and several Long Tailed Tits along the bridleway past the hide. Another bird of note was a Raven Cronking away as it flew over Big Otmoor. 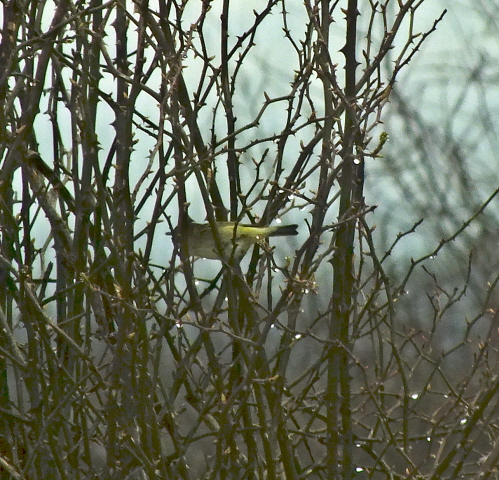 It was a bitterly cold day. Several thankfully brief hail showers accompanied me along the bridleway. Apart from, for a few all to short minutes, the sun broke through the clouds. Causing steam to erupt from the hedgerows.


I had a fantastic day today but it wasn't over yet. Driving slowly up Otmoor lane. Approaching the farm entrance on the right. I observed a flock of some fifty Fieldfare fly over the road and alight on the bushes in front of me. they were followed by what i can only describe as a swarm. They were landing on every available bush and tree. I made a conservative estimate of three hundred. But on reflection it could easily have been double that. It was hard to keep track. As large flocks were continuously flying back and forth across the road and into the fields either side.
The Hedges on Otmoor today had been pretty Spartan. But this 300 more than made up for it. 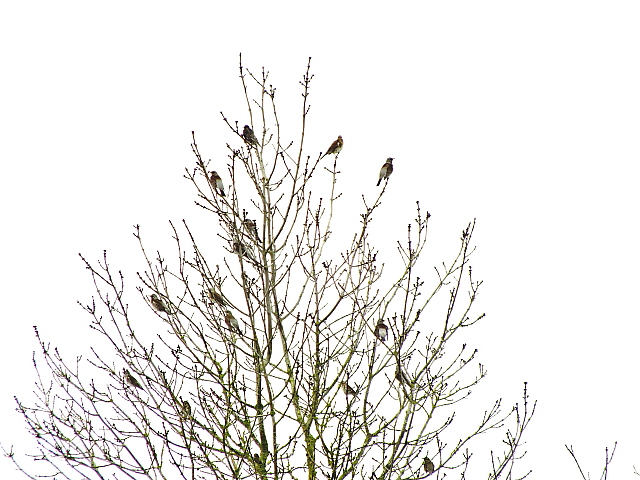